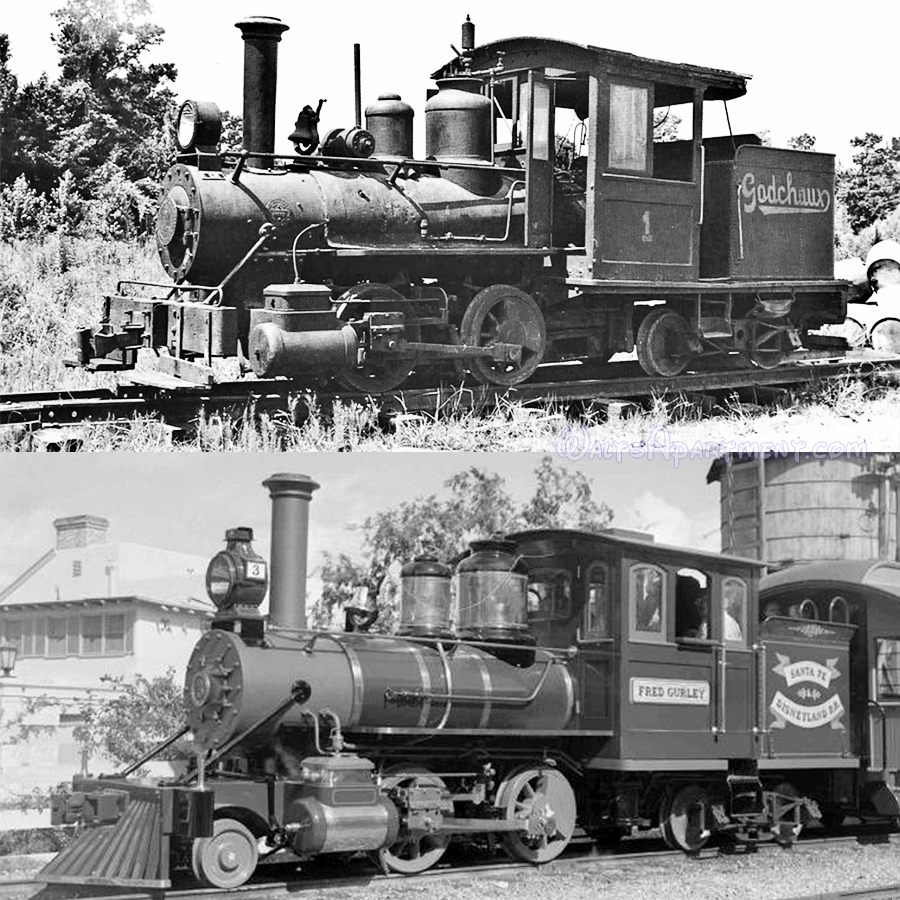 Previously, the engine was transporting sugar from the plantation to the mill, and in 1910 was converted to a switch engine at the Godchaux Sugar Company’s mill.

The Disney Studios retrieved the mass of metal and rotted wood and brought it to the studios for a massive restoration project. Once the original boiler and water tank was removed, the frame, wheels, rods, running gear, cylinders, and domes were refurbished.

On March 28, 1958, the newest addition to the Disneyland Railroad joined engines #1 C. K. Holliday, and #2 E. P. Ripley to pull the train consists around the Park.

In 2007, the Forney-style Baldwin 0-4-4T engine had a massive rebuild. Sadly, the original Baldwin builder plates (Baldwin Locomotive Works – Philadelphia – 1894 – No. 14065) are no longer on the Disneyland locomotive, and have likely been stolen, and in a private collection.

The #3 Fred Gurley still pulls guests around Disneyland in a regular basis. This photo appeared in a Summer 1959 Los Angeles Times Sunday insert, touting all the new features added to Disneyland in 1959. However, the guests are on the wrong side of the tracks at Main Street Station. And the real oddity about this photo is that it’s clearly the #3 Fred Gurley engine – but the nameplate on the cab says “Ernest S. Marsh”.

It’s likely that the Park wanted to highlight the newest locomotive to join the fleet (the #4 Ernest S. Marsh,) but it wasn’t ‘photo ready’ when they needed to take the photos and send them to the newspaper… and most people wouldn’t notice the difference in engines when they came to Park, and only remember the name.

Walt Disney’s Railroad Story: The Small-Scale Fascination That Led to a Full-Scale Kingdom If you love the Disneyland Railroad, or you know someone who does, you *MUST* buy this book. It is *THE* definitive history of Walt's beloved trains. Thousands of books and articles have been written about Walt Disney and his organization, yet few people realize the significance railroading played in the evolution of the Disney empire. Encouraged by Walt's family and railfans inside and outside the Disney organization, Michael Broggie has chronicled the tale of Walt Disney's personal involvement in railroading. This book unveils the private realm of Disney railroading through hundreds of photographs, many of which have never before been made public, and interviews with Mrs. Walt Disney, Diane Disney Miller, Ward Kimball, Ollie Johnston, Bob Harpur, Bill Cottrell, Roger Broggie, Bill Evans, and many others. Walt Disney's love affair with trains began in his hometown of Marceline, Missouri. His first job was selling tobacco, candy, and newspapers on the Missouri Pacific line. By 1950, his enthusiasm for realistic model trains had evolved into an elaborate backyard live steam railroad. Walt's Carolwood Pacific Railroad included a 46-foot-long trestle, loops, overpasses, gradients, an elevated dirt berm, and a 90-foot tunnel underneath Mrs. Disney's flower bed! The complete history of the Disney railroads, from small scale models to steam trains for the Disney parks is covered. This is a book all Disney collectors and railroad enthusiasts will want to experience! Over 300 illustrations, many previously unpublished.