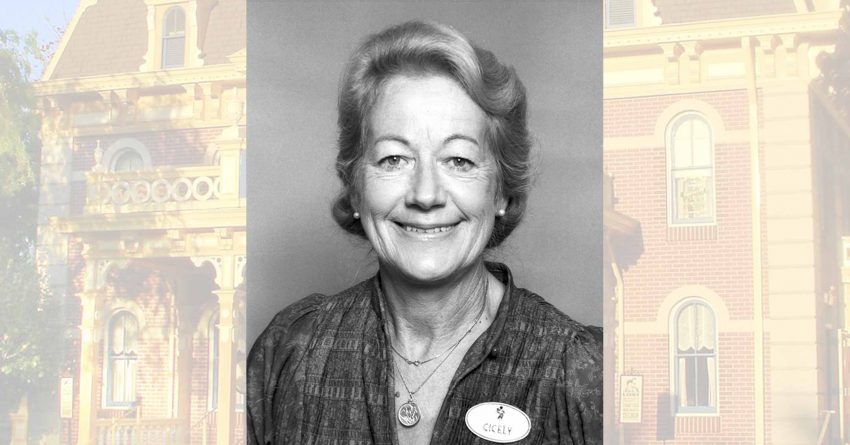 Cicely began at Disneyland in 1957 as a ticket seller. In 1959, she joined the Tour Guide Department and was responsible for initiating its growth.

It was a quality that Walt Disney had, and obviously Cicely Rigdon had it, too: persistence. “When they first opened the Park,” Cicely admits, “I made five attempts to get a job. The fifth time, I was finally hired, and I was so excited I came home and drove my car through the garage!”

Cicely began at Disneyland in 1957 as a ticket seller. In 1959, she joined the Tour Guide Department and was responsible for initiating its growth and development. “Walt really liked the Tour Guides,” Cicely says, “Every time he would come to the Park he would always stop by and see us and talk to us.”

She eventually became the supervisor of Guest Relations, and in 1967 took on additional responsibility for the ticket sellers, ticket receptionists, and Guest Relations.

While in Guest Relations, she was responsible for Walt’s apartment above the Main Street Fire Station, and was therefore known as the “Keeper of the Keys.”

Among the other highlights of her career, Cicely most fondly remembers her trip with Walt Disney to the 1964-65 New York World’s Fair, and the many conversations she had with him while he was in the Park. She also counts being able to train all the ticket sellers and ticket receptionists for the opening of Walt Disney World as one of her treasured opportunities.

She remembers her years at Disneyland and her unique boss with great fondness. “Walt was just a very decent, very nice man,” Cicely says. “And I believe that is reflected in all of us here at Disneyland, and that this place for family and fun and decency is what it’s all about.”