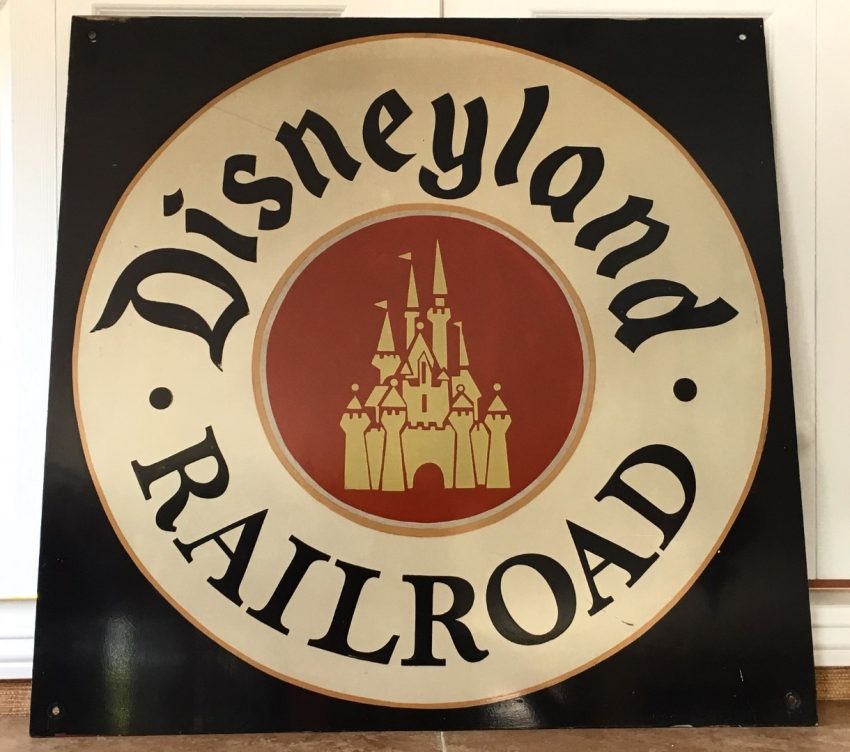 All aboard… for awesome! An authentic Disneyland Railroad sign from the Happiest Place on Earth! This large, striking steel sign features Sleeping Beauty castle under the famous and evocative DISNEYLAND logotype. The sign offered here- a genuine sign used at Disneyland- is the type used on the Disneyland rolling stock called “Holiday Red.” The Disneyland Railroad has four “sets” of passenger cars. Depending on which train pulls into the station (the Excursion train, Holiday Green, Holiday Blue, or Holiday Red) you board front-facing excursion cars, side-facing gondola cars, or a combination of gondola and cattle cars trailed by a caboose. The Disneyland Railroad sign offered here is type of sign is seen on the latter combination of train cars, Holiday Red.
Originally named Retlaw 2, this train set consists of four gondola cars, three cattle cars, and the caboose, and all but two cars of Holiday Red were put into service for Disneyland’s opening day, July 17, 1955. At that time this combination of rolling stock was known as Retlaw 2 (Walter spelled backwards), since Walt Disney retained ownership of the Disneyland trains in the early years.

In the photos above you can see the same type of sign on Holiday Red as it takes Disneyland guests on a grand circle tour around Walt Disney’s Magic Kingdom. Now this spectacular original Disneyland sign can remind YOU of the great adventures you’ve had at the Happiest Place on Earth.

A smaller 18″ x 18″ version of this this sign sold for over $7,600.00 including buyer’s premium at the Van Eaton auction in December 2016. This much larger sign is an imposing 32″ x 32″ and weighs nearly 20 pounds! You can see both sizes in one of the above photos. This sign is constructed of sturdy steel and will be the centerpiece of any train room, play room, or Disney collection! The sign is in very fine condition with one screw hole in each corner. Shows minor handling and scratches from use at Disneyland. Includes the Phil Sears Collectibles Lifetime Guarantee of Authenticity. Item # 9958, $6495