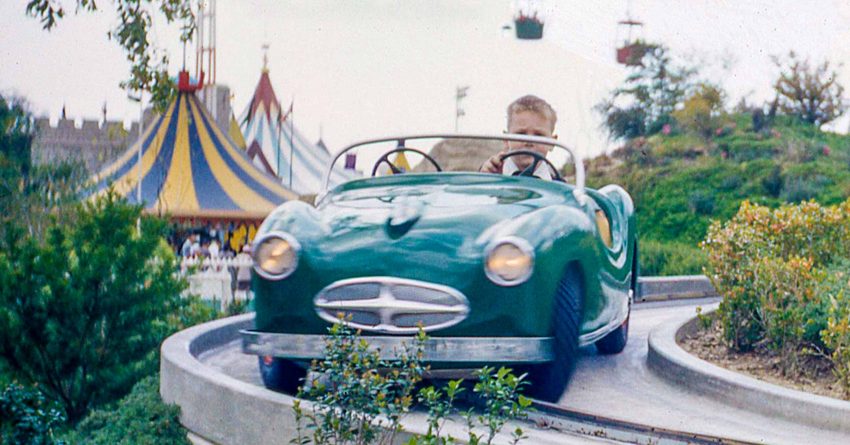 The Midget Autopia operated at Disneyland for almost nine years, from April 23, 1957 until April 3, 1966. While the small children loved it, there were problems with the design, the capacity, and the overall idea of setting young children off by themselves. Plus, the track occupied a fair amount of space in Fantasyland, which would soon be adding a new attraction… “it’s a small world” would be transplanted from the 1964/1965 World’s Fair into Disneyland. When the attraction closed in 1966 (less than a year before Walt Disney passed away,) Walt donated the entire ride – the cars, the track, the electrical control system, and even the re-installation at a local park, to his boyhood hometown in Missouri. It operated for many years, and is believed to be the only attraction ever to leave Disneyland and be operated for guests outside the Park. While it lasted for several years, eventually the maintenance costs got too high, the ridership got too low, and the novelty wore off. Ultimately, a summertime-only attraction, designed to only hold very small children just isn’t a good idea for a modern audience of kids. And so, the remaining Midget Autopia cars were put into storage and the electrical system was removed. The remaining cars were truly wonderful, unique, and rare pieces of Disneyland history.

In the early/mid 2010s, Dave Tavres suggested an idea on how to preserve the attraction’s history, and promote Walt Disney‘s legacy. The proposal would cost the city nothing, but would expand the knowledge for Walt Disney‘s love for his boyhood hometown, and the cars would be accessible artifacts of Disneyland history. By reaching out to several auto-body repair shops around the Country and asking each location to donate their labor and materials to restore one car each to its original glory, the shops could get some name recognition, and the work could be completed at not cost to the city. The shop would be expected to repair any body damage, repaint the car in a specific, original color, restore the beautiful chrome accouterments, put on new tires, and remove the electric motors and other parts not needed for display. In exchange for their donation, the shops would be credited anytime that Midget Autopia car was displayed.

As each car was restored, automotive museums around the world would be offered a two-year loan of a preserved Midget Autopia car to display alongside their own full-size museum vehicles. As long as the museum covered the cost of shipping from (and back to) Missouri, and they displayed proper credit of that car’s restoration team and the City of Marceline, there’s no doubt museums would happily become temporary stewards of the ride vehicles, and promote the exhibit to their visitors. People of all ages around the world would enjoy seeing an original piece of Disneyland history in their own town. And considering the number of car museums around the planet, the Midget Autopia cars could circle the globe for years, delighting Disney fans everywhere.