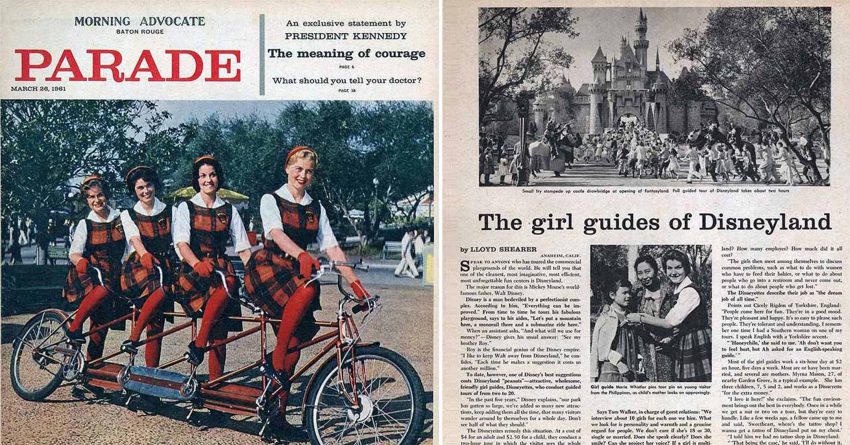 This article from the Parade Magazine section of  The Advocate newspaper in Baton Rouge, LA on March 26, 1961 was short, but featured a nice picture of some 1961 Tour Guides and several quotes from so-called “Disneyettes” (a term that has NEVER been heard since.)

Until the 2000s, to be a Disneyland Tour Guide was an extremely special honor. It meant you were the best-of-the-best. You were expected to be friendly, proper, helpful, and truly loved helping guests. Cicely Rigdon came to Guest Relations around 1959 when she was tasked with expanding and advancing the Tour Guides into the special group that they were. When tradition, etiquette, and congeniality were held in higher regard, the Tour Guides were considered special.

Originally, Walt Disney was the tour guide. He showed Kings and celebrities around the park. He delivered facts and figures, stories, and guidance to the enthralled visitors. Before long, Walt was so busy with his films, “plusing” up Disneyland, and finally developing the grand scheme for Florida, that he had little time for playing tour guide – and so, Cicely began her work. Today, guests to Disneyland love “A Walk in Walt’s Footsteps” tour – but if you’re a VIP with a membership, you can enjoy Club 33, Royal Street.

Below is the text and a PDF of the short article about the 1961 Tour Guides. The girl guides of Disneyland

Speak to anyone who has toured the commercial playgrounds of the world. He will tell you that one of the cleanest, most imaginative, most efficient, most unforgettable fun centers is Disneyland.

The major reason for this is Mickey Mouse’s world famous father, Walt Disney.

Disney is a man bedeviled by a perfectionist complex. According to him, “Everything can be improved.” From time-to-time he tours is fabulous playground, says to his aides, ” Let’s put mountain here, a monorail there and a submarine ride here.”

When an assistant asks, ” And what will we use for money?” – Disney gives his usual answer: “See my Brother Roy.” Roy is the financial genius of the Disney empire. “I like to keep Walt away from Disneyland,” he confides. “Each time he makes a suggestion it cost us another million.”

To date however, one of Disney’s best suggestions cost Disneyland “peanuts” – attractive, wholesome, friendly girl guides, Disneyettes, who conduct guided tours of from two to 20.

“In the past five years,” Disney explains, ” our park has gotten so large, we’ve added so many new attractions, keep adding them all the time, but many visitors wander around by themselves for a whole day. Don’t see half of what they should.”

The Disneyettes remedy the situation. At a cost of $4.00 for an adult and $2.50 for a child, they conducted 2 hour tour in which the visitor sees the whole works – Fantasyland, Frontierland, Adventureland, Main Street, U.S.A. – the whole kit and caboodle.

Not the least pleasant part of the tour is the girl guide herself – cheerful, friendly, well-built, knowledgeable – everything that a young helpful woman should be.

At the moment there are 40 Disneyettes on duty – the force will be expanded to meet the summer crowds – and each is a specially trained, handpicked honey.

Says Tom Walker, in charge of guest relations: “We interview about 10 girls for each one we hire. When we look for his personality and warmth and a genuine regard for people. We don’t care if she’s 18 or 30, single or married. Does she speak clearly? Does she smile? Can she project her voice? If a girl is multilingual that’s an advantage. Right now we have girls who speak French, German, Spanish, Japanese, Swedish and Arabic.

“When we accept a girl,” Walker adds, “we put her in our training school for two weeks. She’s given a Disneyland dictionary, full of factual data on all the sites, rides and exhibits. She studies this carefully, then memorizes answers to the questions most frequently asked – for example: How large is Disneyland? How many employees? How much did it all cost?

The Disneyettes describe their job as “the dream job of all time.”

Points out Cicely Rigdon of Yorkshire, England: ” people come here for fun. They’re in a good mood. They’re pleasant and happy. It’s so easy to please such people. They’re tolerant and understanding. I remember one time I had a Southern woman on one of my tours. I speak English with a Yorkshire accent.

“‘Honeychile,’ she said to m. ‘Ah don’t want you to feel hurt, but Ah asked for an English-speaking guide.'”

Most of the girl guides work a six-hour day at $2 an hour, five days a week. Most are or have been married, and several are mothers. Myrna Mason, 27, of nearby Garden Grove, is a typical example. She has three children, 7, 5 and 2, and works as a Disneyette “for the extra money.”

“I love it here!” she exclaims. “The fun environment brings out the best in everybody. Once in a while we get a nut or two on a tour, but they’re easy to handle. Like a few weeks ago, a fellow came up to me and said, ‘Sweetheart, where’s the tattoo shop? I wanna get a tattoo of Disneyland put on my chest.’

“I told him we had no tattoo shop in Disneyland.

“‘That being the case,’ he said, ‘I’ll do without it, because you got everything else.'”

The one cardinal rule all the Disneyettes must obey is known as “the no-false-information rule.” If a visitor asks a question and the guide doesn’t know the answer, she must politely reply: “I don’t know, but I’ll find out for you.”

Says Disneyette Marie Arias: “It’s the most convenient answer we girls have – especially when some guy asks for our phone number.”