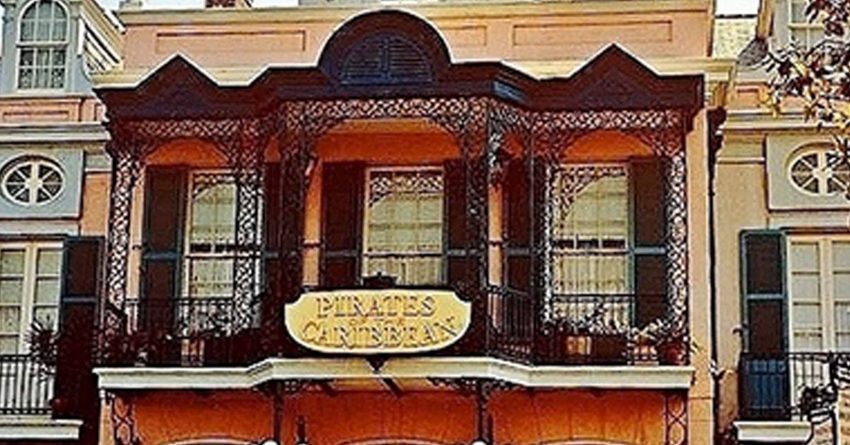 Some people have asked about Walt’s ‘other’ apartment in Disneyland. Yes, there was another… above (the original) Disney Gallery.

Walt had a vision of a “luxury” apartment to be built over Pirates of the Caribbean. It would have much more space than his apartment over the firehouse on Main Street U. S. A. and would include a master bedroom, a sitting room, a smoking room, a room for the grandchildren, a family room, a dining room, an enclosed patio and a balcony overlooking New Orleans Square. What was not directly included was a kitchen. That’s because the luxury apartment would share the kitchen with Club 33, Royal Street, which was separated by a single wall. Sadly, the work was never completed. Walt passed away before it was finished, and Walt’s brother Roy did not have the same desire to have a place inside the park to sleep or entertain – the same was true for Walt’s wife Lillian.

For many years A Walk in Walt’s Footsteps tour ended in the Gallery and included some history and trivia about the space. One of the best secrets was the doorway that once led to the Club 33 kitchen. When the dining room was converted to a gallery space, the doorway was sealed to look like a wall, but only the doorway was covered – the trim around the doorway remained, which gave a slightly eerie look, being that it looked like a doorway, but with no door. The Gallery placed a large moveable wall in front of it on which they hung artwork, but it was still easy to point out the entry. The apartment was mostly vacant for several years until it was turned into office space and storage. In 1987 most of the space was turned into The Disney Gallery. It was at that time that the curved stairs were added to give guests access to the Gallery. Prior to that, there were two entries to the luxury apartment. One was the stairway at 21 Royal Street (which guests can still see today) that was the ‘main’ entrance to the front door of the apartment. That entrance would bring Walt’s visitors through a short hallway that led into the main part of the apartment. The other entrance was a private entrance designed so that Walt could park his car in the back or just get to the apartment without going ‘on stage.’ The ‘back’ door is a beautiful, large, old door that only custodial and few other cast members ever get to see. Going through that door would take you down a long walkway that’s actually right above the beginning part of the queue of the Indiana Jones Adventure where you look up and can see the sky. At the end of the walkway are several sets of stairs that bring you to ‘street’ level – this is also the back entrance to the New Orleans Main Kitchen.

On August 7, 2007, Disney made the disappointing decision to close the Gallery. The replacement is called the “Dream Suite” and actually is a luxury apartment, and while it is beautiful, it is no longer Walt Disney’s apartment. Closing the Gallery also closed another chapter on Walt history. Never again will fans be able to study the 1960’s woodworking, paneling or design that Walt himself wanted. Walt did say that he did not want Disneyland to be a museum, but as time moves forward, Disney is removing more and more of the intimate connections to Walt Disney.

For those ardent Walt fans from now and in the future, the best we can do is to ask fans to share their photos of the would-be luxury apartment. Help preserve those special connections with Walt Disney that will certainly be gone in years to come.